Researcher Nia Lewis takes the blood pressure of a study subject in the Centre for Heart, Lung and Vascular Health at UBC’s Okanagan campus.

An international study led by a researcher at UBC’s Okanagan campus has found that a common blood-pressure drug can cause lightheadedness and possible fainting in some patients. 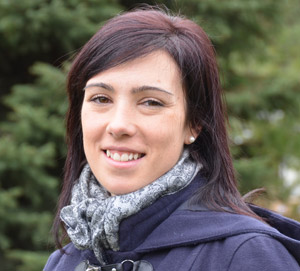 Investigators found that all but one of 12 participants who took the medication experienced temporary dizziness or lightheadedness upon standing.

“We were able to determine that, because prazosin shuts down a pathway that is critical to regulate blood pressure, the capacity to safely control blood flow to the brain was also reduced to a level that could induce fainting,” says Lewis.

The drug essentially causes a drop in blood pressure in individuals with normal blood pressure, leaving them at risk of becoming lightheaded or possibly fainting.

“No scientific paper has ever looked at the mechanisms for this,” says Lewis. But identifying what is happening and possibly why is only the first step in a lengthy research process, Lewis says.

“We are trying to understand how the system regulates itself. We are still trying to define what is happening. It’s just the first step in recording and interpreting these results before getting into the clinical work.”

Part of the research shows that the actions of the sympathetic nervous system that would normally prevent the big drop in blood pressure on standing, and consequently prevents an unnecessary fall in brain blood flow, is prevented by the drug, which has sympathetic receptor-blocking properties. By thus blocking this critical pathway, the physiological response can prove dangerous for those patients with normal blood pressure who use prazosin for treating other ailments.

Fainting is quite common, says Lewis, especially when a patient rises from a lying-down position.

“This research gives science another piece of the puzzle towards our understanding of the regulation of blood flow and how it relates to conditions of low blood pressure and loss of consciousness,” says Ainslie.