Researchers at the University of British Columbia’s Okanagan campus are launching a ground-breaking study examining how blood flow to the brain is altered in athletes recovering from sports concussions.

The Integrative Sports Concussion Research Group (ISCRG) will focus on young athletes, whose involvement in their respective sports has been curtailed due to head injury. Over the next year, faculty and students from UBC’s School of Health and Exercise Sciences will conduct an examination of up to 90 recently concussed athletes aged 14 to 25, in conjunction with Lifemark Health Sports Medicine Clinic in Kelowna. 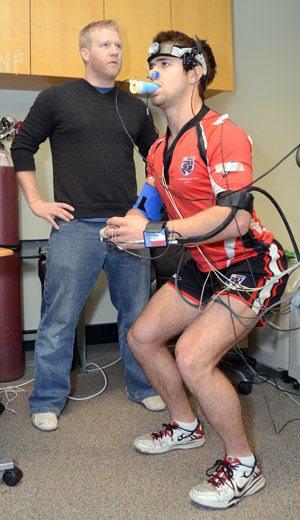 Graduate student Kurt Smith keeps an eye on the data while UBC athlete Ryan Simair is put through a series of exercises to test the impact physical activity has on a concussion.

“Concussion is a very common condition that is treated by many sport physicians. Yet there are many aspects about this condition that are poorly understood,” says Paul van Donkelaar, principal investigator of the research project called Exercise following concussion: do disruptions to cerebral autoregulation underlie executive function deficits.

Currently, concussed athletes are assessed and their recovery is often based on exacerbation of symptoms like headaches, dizziness, nausea and fatigue as measured on a graded exercise protocol on a stationary bike. Traditionally, once a patient remains symptom free for a period, they will be cleared for contact at practices and, in time, for a full return to sport following clinical assessments.

UBC’s research will challenge how the results of those assessments are achieved. The aim of the study is to generate data needed to identify physiological and cognitive markers associated with post-concussion syndrome.

Specifically, one of the main dilemmas facing physicians is determining when it is safe for an athlete to return to their sport.

“Clinical recommendations are based on subjective symptoms,” says van Donkelaar, who is acting director of the School of Health and Exercise Sciences. “We intend to employ objective neurological measures observed at rest or during a common ‘stress’ following a concussion while exercising at a similar intensity to an actual game.”

Researchers will have test subjects complete a series of moderate to intense exercises in two-hour sessions at regular intervals over a 12-month period. Cognitive function, cardiovascular performance, cerebral blood flow and other procedures will be measured and recorded, with subjects also completing a symptom evaluation questionnaire to document specific symptoms and their severity.

Co-investigators include Dr. Bradley Monteleone, of Lifemark Health Sports Medicine Centre and UBC’s Faculty of Medicine; Phil Ainslie, associate professor in the School of Health and Exercise Sciences; and UBC Okanagan campus graduate students Kurt J. Smith and Katelyn R. Marsden. Marsden is basing her Master’s thesis on the research. The project provides a hands-on opportunity to investigate the progression of post-concussion symptoms on cognitive and cerebro-vascular functioning before, during and after exercise.

“This is a new research area that has the potential to generate positive health and economic benefits to all individuals afflicted with concussion,” says Marsden. Ultimately, the research may provide further information on the clinical implications and potential screening ability for people who have had a concussion.

“This will be attractive to all family and sports physicians across Canada who are currently limited in their ability to objectively diagnose concussion, and to prescribe a safe and valid return to sport or physical activity,” says Marsden.

Investigators plan to recruit two groups of subjects to participate. The concussion group will be recruited from athletes, both male and female, who have recently suffered a concussion. In addition, a control group will include athletes with no history of concussion and matched for age, gender, activity and education level.

The ISCRG requests that potential test subjects enlist by contacting Katelyn Marsden at 250-938-0273 or by emailing concussion.research@ubc.ca. Subjects will visit the testing lab four times over the course of one month, with each session lasting about two hours in duration. 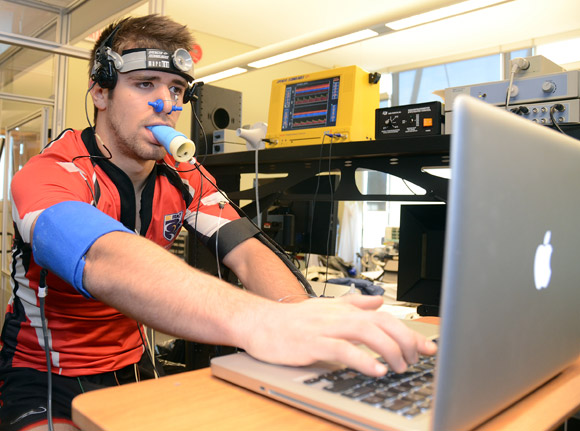 UBC athlete Ryan Simair is put through a series of exercises to test the impact physical activity has on a concussion.